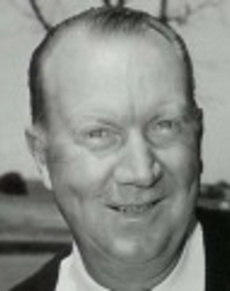 Ev Comstock Sr., was one of the first six people to be inducted into the South Dakota Hall of Fame, being selected as a member of the inaugural Class of 1977. His first encounter with golf came as a 10-year-old caddie in 1922 after his family moved to a farm near Aberdeen Country Club. Ev later became a caddie and then an assistant pro at Minnehaha Country Club in Sioux Falls before becoming the head professional at Aberdeen in 1928. Known as “Mr. Golf” in South Dakota, Ev was a pro at Huron, Yankton and Scottsbluff, Nebraska, before becoming the head professional at Elmwood Golf Course in Sioux Falls beginning in 1947. Ev held that position at Elmwood Golf Course for 28 years until he retired in 1975. While at Elmwood, he introduced pull carts to area golfers. The clubhouse at Elmwood Golf Course is named in his honor. Ev won his age division (60-64) at the National PGA Senior Championships in 1973. Ev and his wife, Eileen, had seven children. All seven of their children took up the game of golf and the Elmwood operation became a family affair. Both of the Comstock daughters, Jeanne and Carol, won state Amateur titles, as did sons Byron, Terry, and David. All five of their sons followed Ev’s lead in becoming golf professionals.