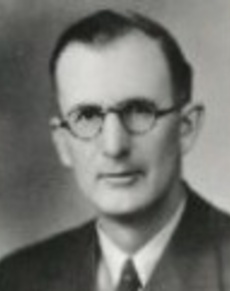 C. Irvin Krumm became the 7th member to be inducted into the SDGA Hall of Fame, entering the Hall, along with Aberdeen’s Charles Howard, in 1978. He was a big promoter of junior golf. Irv learned his golf playing on the sand greens in his native Iowa as well as Redfield, Iroquois, and Irene. His accomplishments on the course include Match Play Champion in 1932 and a runner-up finish in 1936. He also took the 70-and-over championship in the 1970 SDGA Senior Championship. Irv was a member of the greens, grounds and tournament committees during many years of play at Huron Country Club. He taught at Redfield High School from 1923-27 and served as superintendent of schools at Iroquois from 1927-40.